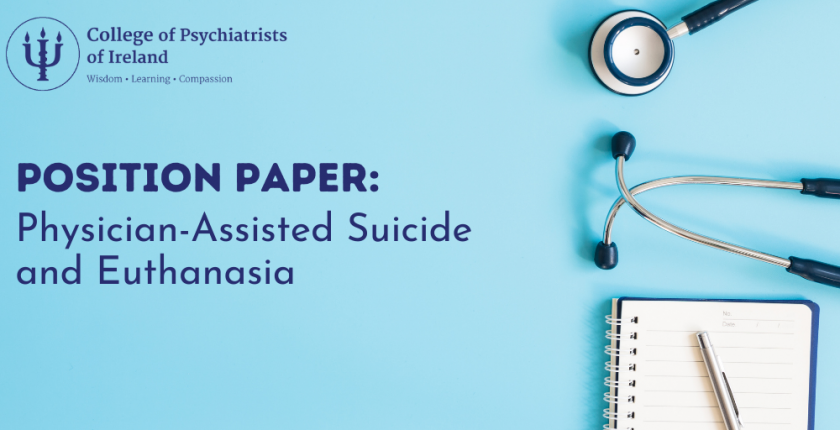 PAS-E is also known as “assisted dying” and in the New Year the issue will be the focus of a Special Oireachtas Committee set up to examine the Dying with Dignity Bill (2020).

The College of Psychiatrists is the professional and training body for psychiatrists in Ireland and represents 1,000 professional psychiatrists (both specialists and trainees) across the country.  It has today published a position paper on this issue [see editors’ note below] which sets out some key issues regarding the introduction of assisted dying in Ireland.  These include:

Consultant Liaison Psychiatrist Dr Eric Kelleher is a member of the College of Psychiatrists and contributing author to the position paper on assisted dying.

Speaking today, he said: “We are acutely aware of the sensitivity of this subject, and understand and support the fact that dying with dignity is the goal of all end-of-life care. Strengthening our palliative care and social support networks makes this possible. Not only is assisted dying or euthanasia not necessary for a dignified death, but techniques used to bring about death can themselves result in considerable and protracted suffering”.

“Where assisted dying is available, many requests stem, not from intractable pain, but from such causes as fear, depression, loneliness, and the wish not to burden carers. With adequate resources, including psychiatric care, psychological care, palliative medicine, pain services, and social supports, good end-of-life care is possible,” he said.

Dr Siobhan MacHale, Consultant Liaison Psychiatrist, a member of the College of Psychiatrists and contributing author to the position paper on assisted dying, said: “Once permitted in a jurisdiction, experience has shown that more and more people die from assisted dying. This is usually the result of progressively broadening criteria through legal challenges because, if a right to assisted dying is conceded, there is no logical reason to restrict this to those with a terminal illness.”

She continued: “Both sides of this debate support the goal of dying with dignity, but neither the proposed legislation nor the status quo (as evidenced by both clinical experience and the power of this debate) is sufficient. It is imperative for the Irish people to continue to demonstrate leadership as a liberal and compassionate society in working together to achieve this.”

The College of Psychiatrists of Ireland’s position paper on physician-assisted suicide and euthanasia is available to view in full here.