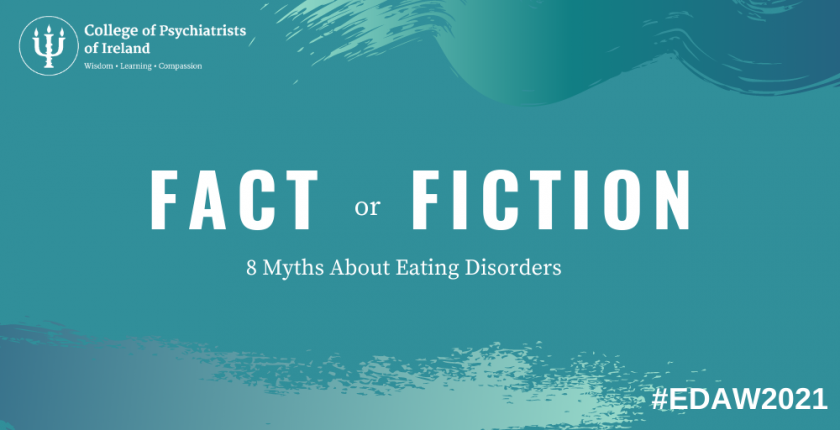 In marking Eating Disorders Awareness Week 2021, we address some of the myths that exist in the public domain surrounding these serious mental disorders.

Awareness of eating disorders has been increasingly evident in media coverage over the past few years, with many women and men coming forward to share their lived experiences with a range of eating disorders. These stories appear in print, social media and documentaries, and often their accounts share a common experience – the stigma surrounding eating disorders leading to delay in recognition and in seeking help. There are many commonly held misconceptions about eating disorders and those who experience them, which actively contribute to the creation and continuance of this stigma.

Here, Dr Michelle Clifford, Consultant Child and Adolescent Psychiatrist, sorts fact from fiction when it comes to the some of the common misconceptions about eating disorders such as Anorexia Nervosa, Bulimia Nervosa, Binge Eating Disorder (BED), and Avoidant Restrictive Food Intake Disorder: 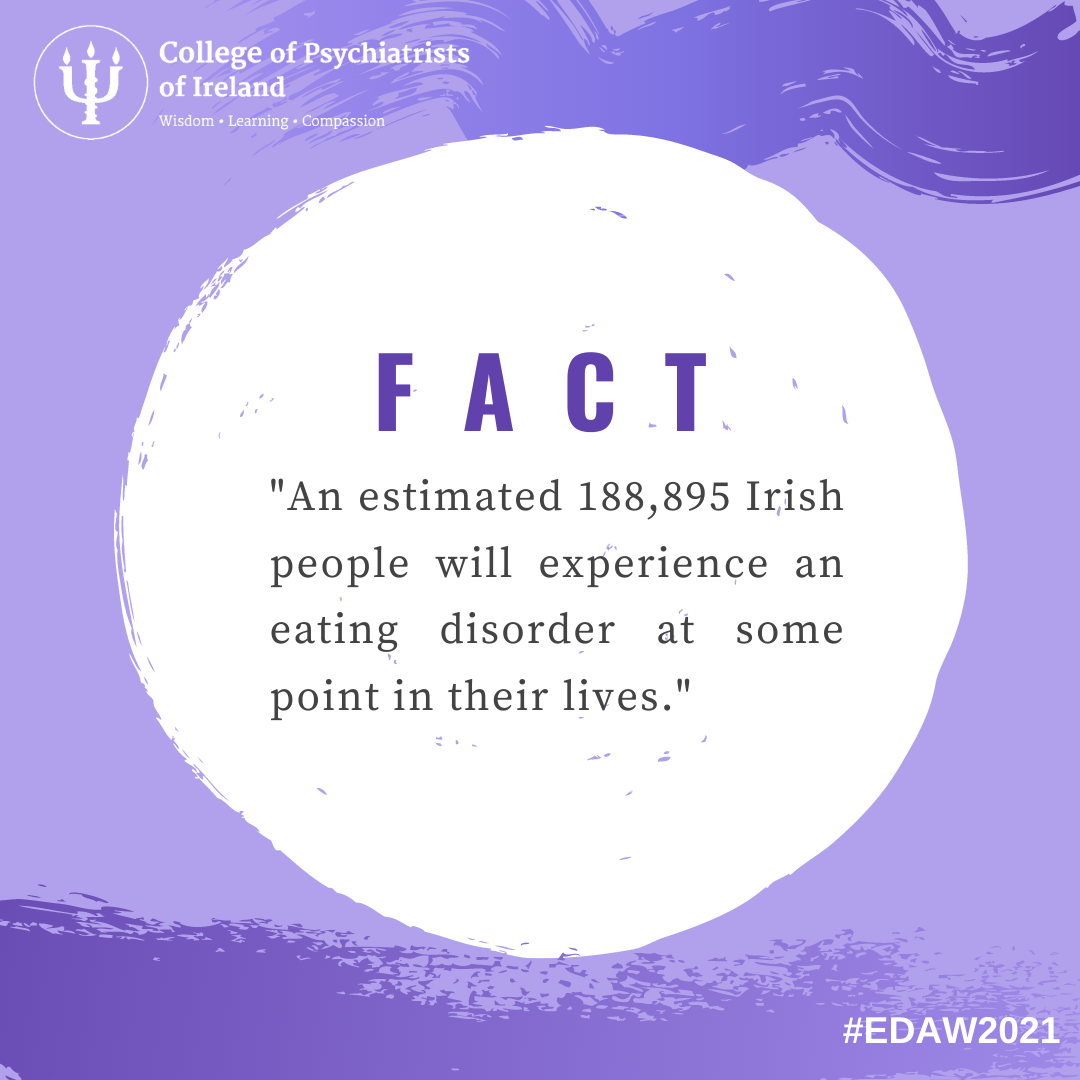 FACT: An estimated 188,895 Irish people will experience an eating disorder at some point in their lives. Approximately 1757 new cases develop each year in Ireland in the 10-49 age group. Recently published data from Finland highlights that eating disorders are a common public health concern among youth and young adults, affecting 1 in 6 females and 1 in 40 males. Adolescence is the peak age of onset for Anorexia Nervosa with recent studies, including the UK and Ireland, suggesting an increase of incidence in children aged 12 and younger.

FACT: Eating disorders are more common in females although the gender gap has narrowed. Eating disorders in boys and men are traditionally under-recognised and under-diagnosed. They are estimated to account for 25% of Anorexia Nervosa and Bulimia Nervosa cases and yet only 1% of research published on eating disorders focuses on males. Eating disorders affect people of all genders, age, races, ethnicities, sexual orientations, and socioeconomic status.

4. Myth: Eating disorders can only be diagnosed at low weights.

FACT: Eating disorders have the highest mortality and morbidity risk of all mental health disorders. Anorexia Nervosa is the most lethal. Current data for adolescents indicate that 10% of those who present with the disorder will die prematurely from it within 10 years of onset. The causes of death from Anorexia Nervosa are commonly physical due to the effects of starvation.  From a mental health perspective, people with eating disorders also have a much higher lifetime risk of having another mental health disorder such an anxiety disorder, a mood disorder especially depression, substance use disorders and impulse control disorders.  20% of fatalities associated with Anorexia Nervosa are accounted for by suicide. 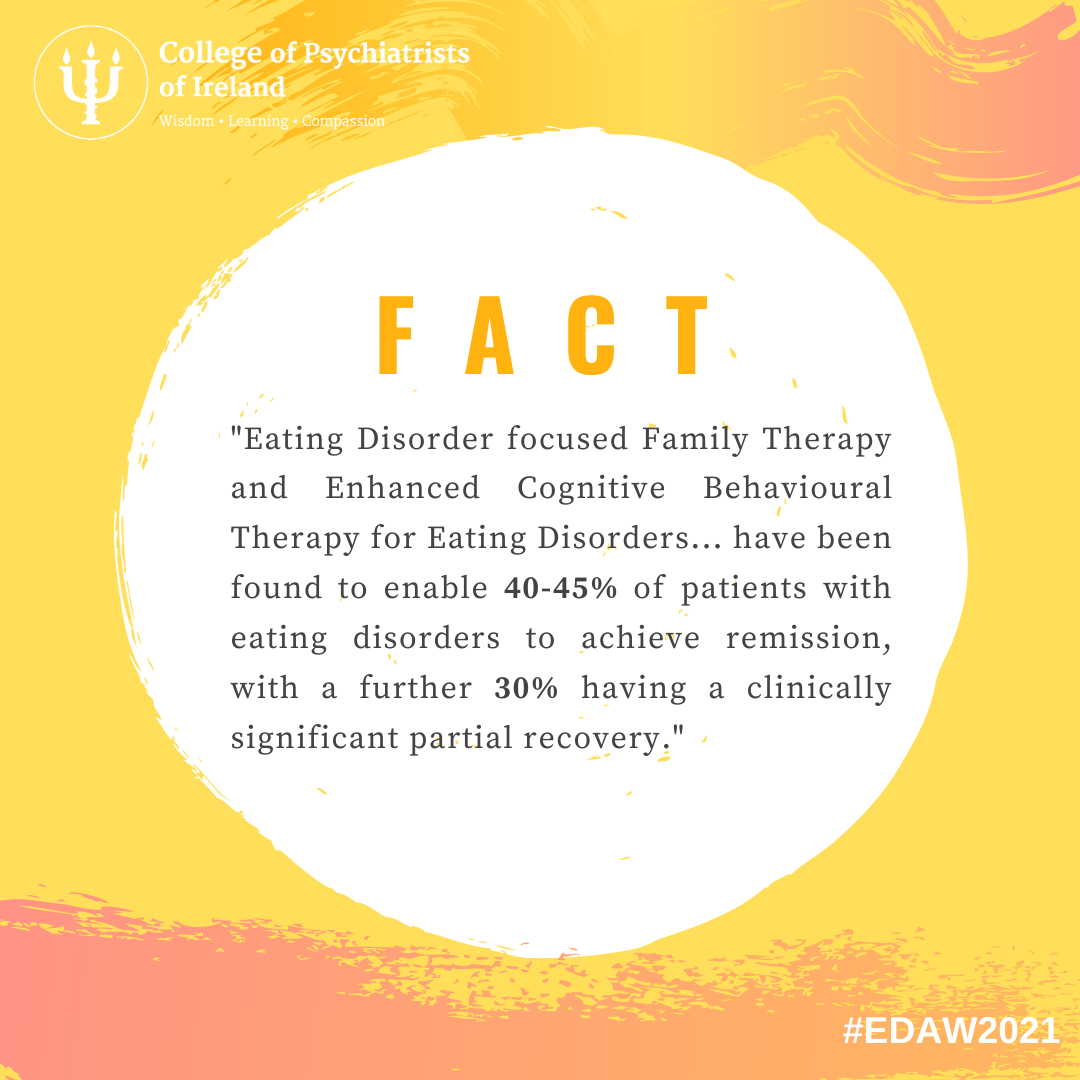 FACT: Despite the relatively higher levels of mortality with eating disorders, there have been improvements in the prognosis over the last decade. Eating Disorder Focused Family Therapy (FBT/FT-AN) and Enhanced Cognitive Behavioural Therapy for Eating Disorders (CBT-E) are current first line evidence based treatments that have been found to enable 40-45% of patients with eating disorders to achieve remission, with a further 30% having a clinically significant partial recovery.

Adolescent patients have an even better prognosis with early intervention. An evidence-based, early intervention care pathway (FREED) has been developed in the UK for 16 to 25 year olds with an eating disorder of less than 3 years duration with exciting improvements in waiting times, symptoms, patient experience and cost savings.

FACT: As with many mental health disorders, the causes of eating disorders are a complex mixture of biological, psychological and social factors. 40-60% of the estimated causality of Anorexia Nervosa and Bulimia Nervosa is heritable or genetic. An exciting global study published results last year in Nature Genetics suggesting that the genetic origins of Anorexia Nervosa are both metabolic and psychiatric. The two well-known most common risk factors for developing an eating disorder are body dissatisfaction and dieting at any weight. While there is little doubt we have much still to learn about the causes of an eating disorder, we do know that families are not to blame and in fact they are best recognised as a significant resource by both people with an eating disorder and for those who treat them.

8. Myth: Eating disorders must be treated in hospital. 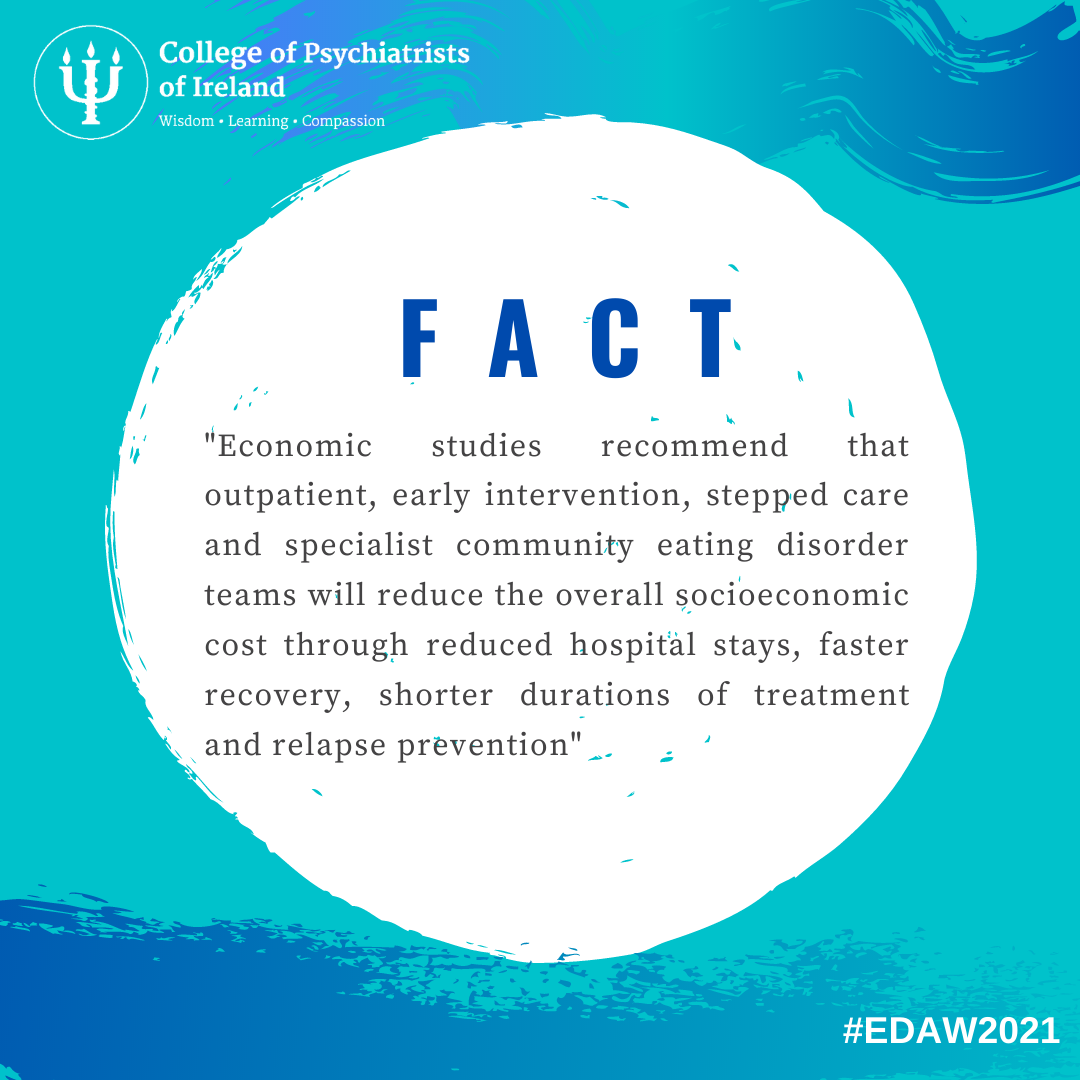 FACT: Only 5-15% of people with eating disorders seek help and 85% report that it is hard to access treatment, with stigma playing a large role. And yet most people can and do recover from eating disorders if they get effective, evidence-based treatment from Eating Disorder-trained staff. There are devastating psychosocial consequences associated with untreated eating disorders. Economic studies recommend that outpatient, early intervention, stepped care and specialist community eating disorder teams will reduce the overall socioeconomic cost through reduced hospital stays, faster recovery, shorter duration of treatment and relapse prevention. The majority of eating disorders can be treated in the community, with hospitalisation being reserved for those who need it. In response to this international best practice , the HSE in Ireland, through the National Clinical Programme for Eating Disorders, has developed a strategic vision for the future so that people of all ages throughout the country should be able to access the necessary services to support them towards as full a recovery as possible.

This post was originally published as part of Eating Disorders Awareness Week 2020.

The HSE National Clinical Programme for Eating Disorders (NCP-ED) is a collaborative initiative between the HSE, the College of Psychiatrists of Ireland, and BodyWhys – the national support group for people with eating disorders.

The HSE Self-Care and information App is available to download to your mobile phone and provides accurate, up-to-date information and tips on how to stay well when managing an eating disorder