[EDITED] What is Anxiety Disorder?

Here you will find our mission and objectives, learn about External Affairs & Policy, our team and how we work.

Anxiety is a term used to describe uncomfortable feelings of nervousness, worry, fear and tension. We all have these feelings from time to time. Anxiety can affect anyone. It affects our thoughts, physical reactions, moods and behaviours. Anxiety can be a normal response to a stress in our lives. Some degree of anxiety can improve our performance in certain stressful situations.

What is an anxiety disorder?

Anxiety becomes a disorder if:

For people with anxiety disorders, worry and fear can become overwhelming and interfere with their ability to lead normal lives.

Anxiety can affect you in 4 main ways:

Anxiety can lead to frequent negative thoughts such as “I will not be able to cope” or “I’m going to fail”.

Anxiety can produce many physical symptoms, such as a pounding heart, a churning stomach, feeling sick, light- headedness, muscle tension or breathing difficulties. Sometimes it is so severe that people can experience a panic attack and might feel that they are having a heart attack.

Persistent anxiety can also lead to feelings of being down or depressed.

Anxiety can change how we behave. In order to avoid the uncomfortable feelings, we start avoiding things that increase our anxiety. The avoidance results in strengthening the feelings of worry.

All four of these areas influence and interact with eachother, as displayed in the below chart: 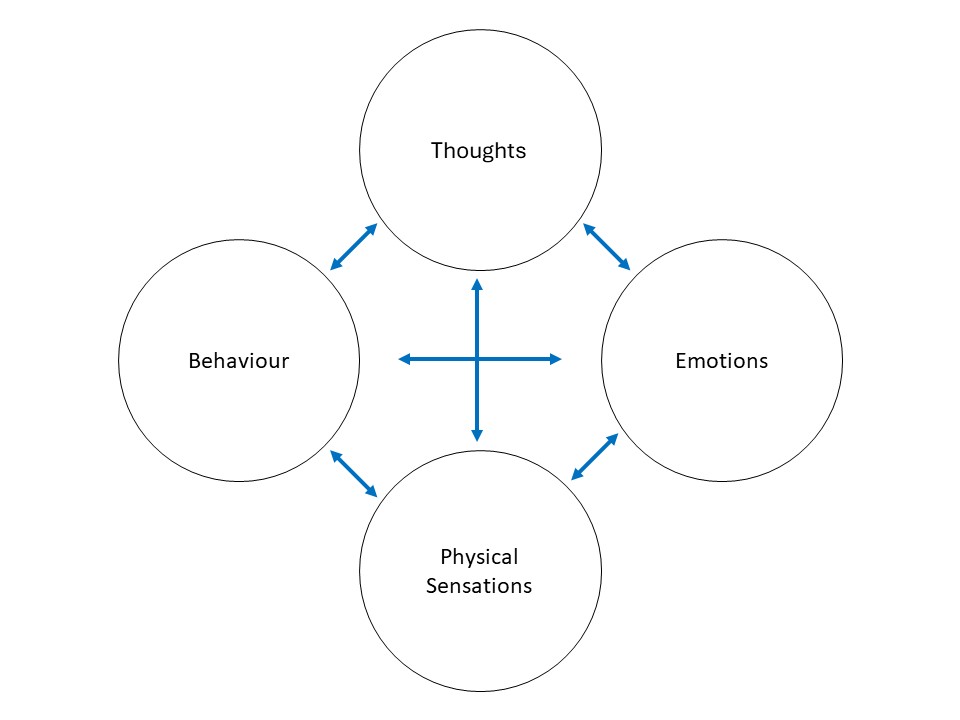 Generalised Anxiety Disorder occurs when a person feels tense and anxious nearly all of the time and cannot relax or unwind even when in peaceful or objectively relaxing circumstances. The person’s thoughts will be preoccupied by different daily worries and fears. They will feel like they cannot switch off from this high level of ‘background’ anxiety. Physical symptoms of anxiety are common and persistent, such as feelings of butterflies in the stomach, headache and muscle tension. Concentration becomes impaired and fatigue is prominent, so that one’s ability to perform normal daily tasks deteriorates.

Panic Disorder is characterised by frequent, unpredictable and intense attacks of anxiety. Symptoms come on suddenly and reach a peak within minutes but can take some time before settling down.

Symptoms of a panic attack can include:

These attacks can be so sudden and severe that it is not uncommon for people to fear that they are going to die, or that they are having a heart attack. Many people who attend A&E departments with chest pain will actually turn out to have had a panic attack.

In between attacks, people can become preoccupied with worry about when the next panic episode will occur – this is known as anticipatory anxiety and it can be the most disabling part of the disorder.

Phobic Anxiety Disorders involve an irrational fear about something which is not actually dangerous in reality. People tend to cope with phobias through avoidance of the feared situation or item. This can cause a lot of disability or disruption in a person’s normal daily life if the situation is very common and so can’t be avoided easily.

Examples of phobic anxiety disorders include:

This is a fear of public places where escape seems difficult (like when in a crowded place, when travelling on public transport, etc.) It usually begins with a panic attack in a public place, and this leads to fear of experiencing more panic attacks in public such that the person begins to avoid certain places. In severe cases, people can become housebound because they become anxious and fearful when they think about even leaving their own homes.

This is fear of being with other people in social group settings. The person worries that they are being scrutinized or judged in a negative way by others, that people think they are boring or foolish, or that they will do or say something that is humiliating such that they may avoid social situations or find them intensely anxiety-provoking if they have to endure them.

These are isolated irrational fears about a specific thing, e.g. flying, fear of heights, spiders, etc. Specific phobias are very common in the general population. People generally do not seek treatment for them as avoidance of the item which they are fearful of can generally be accomplished without it affecting their lives to a great extent.

Obsessive-compulsive disorder is an anxiety disorder in which a person experiences frequent distressing thoughts, images or impulses which are known as obsessions. These obsession don’t make any sense to the person experiencing them (e.g. a person may experience a recurrent mental image of being violent to a family member whom they love dearly, or a fear of being contaminated by germs in food or on everyday items) and so the person can fear that they are losing their mind or are going mad.

The obsession is always distressing and causes anxiety, which the person learns to cope with and reduce by engaging in compulsive behaviour or actions (e.g. hand-washing in those with a fear of contamination). These compulsive behaviours lessen anxiety only temporarily, and so the person becomes trapped in a cycle of obsessions and compulsions which can disrupt their lives considerably.

What are the treatments for anxiety disorders?

One of the most common and effective psychological treatment is a talking therapy known as Cognitive Behavioural Therapy. In CBT the thinking styles and behaviours that may play a role in causing and maintaining anxiety are looked at, and more helpful ways of thinking and behaviours are discovered and encouraged. This can then help to reduce anxiety and improve coping.

Medication can play an important role in helping to reduce anxiety.

Antidepressants are most commonly prescribed medication for management of Anxiety disorders. These have been shown to be effective as part of the treatment of anxiety disorders, even in the absence of depression.

Benzodiazepines are rarely used in the short-term management of anxiety due to risks of addiction in case of longer term use. Read the College position paper on the use of Benzodiazepines here.

Sometimes your doctor might prescribe a different medication if antidepressants have not been effective.

Self-help resources like relaxation, meditation apps and yoga can help with managing anxiety. Similarly educating oneself about anxiety and its management by reading books or online self-help tools can also help in reduction of anxiety symptoms.

Where can I find further information?

For more resources on psychiatry and mental illness, click here.