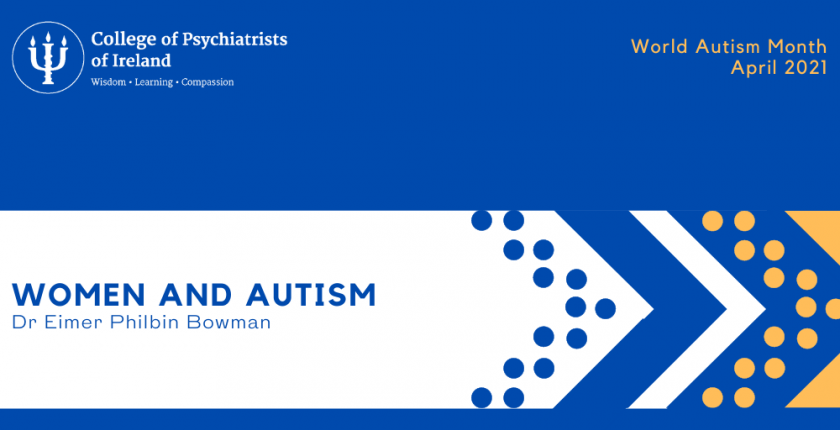 Dr Eimer Philbin Bowman writes about the prevalence of diagnoses of Autism in women, how autism can look different across gender lines and her own experience of diagnosing in light of these differences.

The concept of autism has been revolutionised by research over the past five decades: in 1979 the prevalence rate for autism was estimated at 20 per 10,000 or 2 per 1000; the current rate is 1-1.5% of the population. The term High-Functioning Autism was first used in a published study in 1981, the same year in which ‘Asperger Syndrome’ was the title of Lorna Wing’s seminal clinical account. It was not until  2004 that a study concluded that the two groups were indistinguishable.

In 2007, Tony Attwood in his ‘Complete Guide to Asperger’s Syndrome’ described how he had had begun to include the assessment of adults in his practice: it was his opinion that 50% of those with Asperger Syndrome were not being detected and that 1:4 women to men on the spectrum was a considerable underestimate; in his clinic the ratio was 1:2.

In my own case, the focus of my published research in child psychiatry was Asperger syndrome/High Functioning Autism. However, when transferring from child to adult psychiatry, I had not anticipated that, in my clinic in The Well Woman Centre, I would receive referrals for adult autism assessments. To my surprise, not only women but, over time, men were also referred by GPs or other professionals, often because of the initial concerns expressed by their wives, mothers or siblings. Where possible I would always take a collateral history.

Reviewing my files for 2017-2020, until Lockdown occurred, I diagnosed a total of 89 referrals, 44:45, women to men, a ratio of 1:1. In a number of cases, especially where women were concerned they had been misdiagnosed or never assessed, it was the diagnosis of one or more of their children, or a family member, which prompted the referral.

Many of these referrals confirmed Attwood’s conclusion that girls with Asperger’s syndrome were more difficult to recognise and diagnose, due to coping and camouflaging mechanisms. Compared to most boys, girls can learn how to act in a social setting: being well-behaved and polite, they are more likely to develop a close friendship: their special interests are not as eccentric as boys and their motor co-ordination problems are not as conspicuous. In her well-titled autobiography ‘Pretending to be Normal : Living with Asperger’s  Syndrome’ (1999) the author Liane Holliday elaborates on these coping strategies. Another young and articulate woman who was one of 3 people on the autism spectrum selected by AsIAm to appear as a guest on the Late Late show on April 3rd 2021, also reflected many of these attributes.

The confirmation of being on the spectrum is a major relief to most adults and to their families, who finally have an explanation for the range of challenges they have faced. A detailed assessment report is first sent to the patient. This enables access to the support services, if they are at third level, or in employment, or if appropriate, the option to apply for a disability allowance. A copy of the report is sent to their GP, suggesting medication, or additional referrals, where indicated.

With regard to resources, the Aspire website lists all support services throughout each county in Ireland. Adam Harris, the founder of Autism’s main charity, AsIAm, has done a great service in raising public awareness and ensuring that families, with someone on the spectrum, are represented in the many areas that impact on their lives. In additon, Jessica Kingsley Publishers regularly publish excellent, up-to-date resources pertaining to Autism Spectrum Disorders as well related disorders conditions.