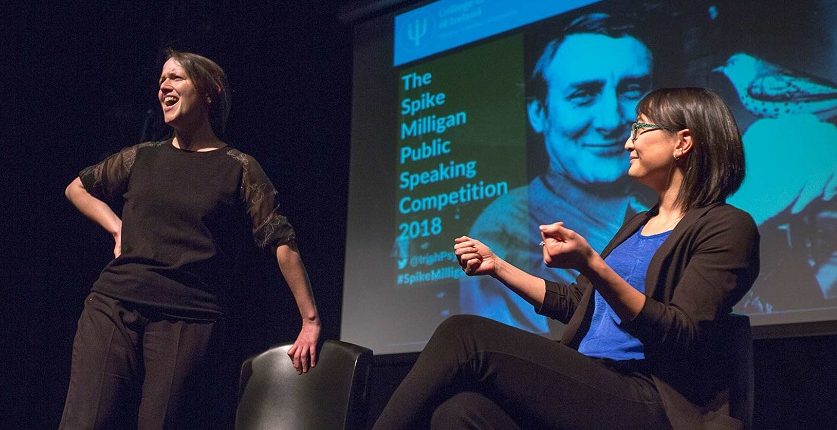 After a fantastic night in the Button Factory in Dublin, Ashlyn Fong and Orla Power, medical students from UL took home the top prize at the Annual Spike Milligan Public Speaking Competition hosted by the College. They faced tough competition from University College Cork who claimed the Runners-Up prize.

College President, Dr John Hillery, opened the event with a warm welcome to all teams and supporters. The Button Factory was packed to the rafters as MC, Dr Matthew Sadlier, led everyone through the evening, with the audience hooked on his quick wit and humour.

The teams presented for 10 minutes and highlighted various issues which contribute to mental illness and affect recovery such as stigma and access to mental health services.

The Public Speaking Competition was first held in 1999 as part of the Changing Minds Campaign of the College, addressing the stigma associated with mental health problems. The aim of the competition is to foster and promote communication skills among doctors in training; with a focus on mental health. Spike Milligan generously leant his name to the competition. It honours his great work as an advocate for those affected by mental ill health.

First up was the UCD team, Diarmuid Lynch and Raneem Saleh, followed by Peggy Miller and Simi George from NUIG.

Next was UCC team members Leah Falvey and Sinead Forde whose presentation that depicted two ‘Irish mammys’ won them the runner up spot. The final team of the first part was Caoimhe Ryan and Leah Carroll who represented TCD (the winning College of the Spike Milligan Competition 2017).

After the interval, all the way from Belfast was Louis-Phillipe and Christopher O’Hagen for QUB, followed by Dublin’s RCSI team, Niamh Dhondt and Shugufta Razzaque. Closing the performances was Ashlyn Fong and Orla Power from UL who took home the Spike Milligan 2018 prize for their emotional and gripping presentation.

While the judges deliberated the teams took part in a digital Q&A session. Throughtout the performances audience members could submit their questions to the teams which appeared live on the screen onstage. Audience members also voted for their favourite presentation and this year’s audience choice was the UCD Team. Very well done to Diarmuid and Raneem!

Finally the judges returned and Prof Anthony McCarthy gave feedback to the seven teams. He praised the high standard of all the presentations said this year was

“The highest standard I think we’ve ever had and the most difficult choice”.

He announced UL as this year’s winners and presented them with the Dick Joynt trophy and cash prize on stage. UCC were named as Runners-Up. Well done to all the participants!