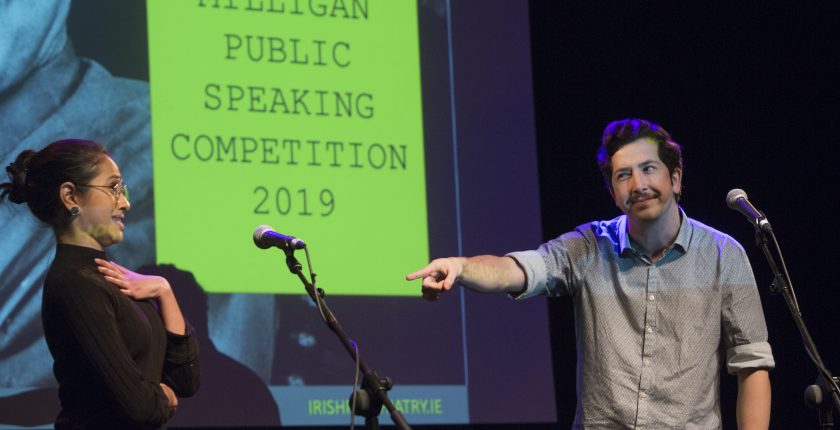 Medical Students Emma Pounder and Juan Lopez Tiboni pipped 5 other teams to win with their take on the title “Cannabis: Path to Nirvana or Road to Perdition?” You can watch parts of their presentation below.

Following a close race at the Button Factory in Dublin on Thursday 21st November 2019, Emma Pounder and Juan Lopez Tiboni, medical students from the RCSI were named the winners of the Annual Spike Milligan Public Speaking Competition, hosted by the College of Psychiatrists of Ireland. They faced tough competition from Melissa Barnes and Mistura Kareem from TCD whose efforts earned them a place as Runners-Up.

RCSI used a clever dialogue between personas of ‘culture’ and ‘science’ to provide the audience with a host of up to date and pertinent facts, non-facts, benefits and harms on consumption of cannabis, separating recreational consumption from medicinal cannabis consumption in a clear, engaging and understandable way all of which marked them out as the winners.

The Spike Milligan Public Speaking Competition was first held in 1999 as part of the CPsychI Changing Minds Campaign, which aimed to address the stigma associated with mental health problems.

The aim of the competition is to foster and promote communication skills among doctors in training, with a focus on mental health. It is also an opportunity for public outreach and engagement on matters concerning mental health. The award is named in recognition of the late Spike Milligan and his work in de-stigmatising mental illness through his books and appearances.

Teams of two from UL, NUIG, RCSI, UCC, TCD and UCD spoke on the topic: “Cannabis: Path to Nirvana or Road to Perdition?”
All six teams tackled the theme using role play scenarios to showcase the pros and cons and variety of attitudes towards consuming cannabis. They explored medical and societal issues around cannabis, the ongoing battle between science and culture when it comes to the public consciousness around the subject, the drug’s purported and sometimes unfounded medical benefits as well as its very real effects on mental and physical health, citing evidence-based research to make their case. The need for further education and research around the potential harms, raising public awareness around the differences between the chemical components of cannabis and the rise in popularity and availability of often-conflated CBD products in the mass market were also a hot focus on the night.

View our full gallery from the competition here.