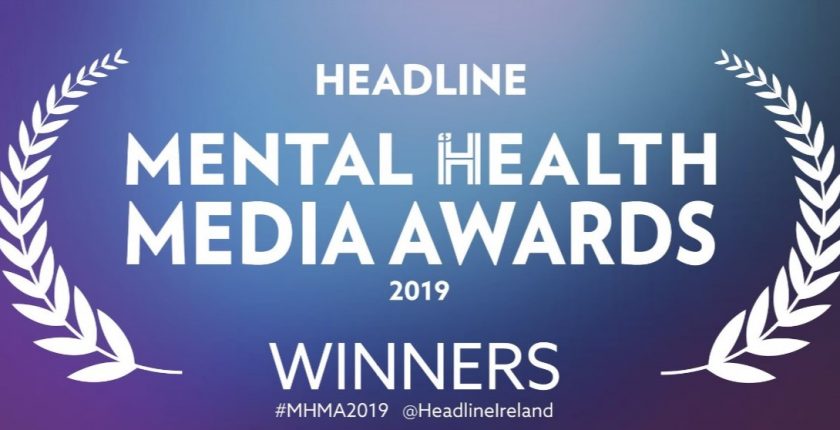 The 2019 winners of the newly relaunched Mental Health Media Awards were announced yesterday, highlighting excellence in media coverage around mental health issues. The awards were first launched a decade ago by Headline, the national media programme for responsible reporting, and representation of mental ill health and suicide. Through the awards, Headline seek to recognise the vital role the media plays in guiding the national conversation on mental health, and to highlight excellence in journalism in print, online and on radio.

The ‘A Lust for Life’ podcast series “Where there’s a Will” took home the trophy for Mental Health Content (Online). The series aims to unpick the Irish mental health system and explore the challenges people can face in accessing services particularly in times of crisis. Episode 2 and episode 3 feature Dr John Hillery, President of the College discussing the history of mental healthcare in Ireland and how the system we know today came to be, as well as policy issues and potential solutions to the problems both mental health service users and professionals are currently facing.

Also among the winners was journalist June Shannon,  for her Irish Times piece “Pregnancy is when a woman’s mental health can be most at risk” in the category ‘Mental Health Journalism | National Print/Online’.  In this feature article, published in a Health and Family supplement of the Irish Times, June speaks with former College President, Prof Anthony McCarthy who is a Consultant Perinatal Psychiatrist, about the risk of suicide during pregnancy, and wrote that:

Pregnancy is not a protective factor for mental illness. On the contrary; it is a time in a woman’s life when her mental health and the well-being of her baby can be most at risk.

During her acceptance speech June was keen to highlight the positive developments in perinatal psychiatry in Ireland, with the national HSE Model of Care for Specialist Perinatal Mental Healthcare now funded and up and running. She noted how this is just one example of media coverage contributing to real positive change in the Irish mental health system.

Congratulations to HEADLINE for running this event which provided a great opportunity to highlight how less stigmatising, more informative and valuable media coverage on mental health, illness and services and most importantly lived experiences, can bring about change in society at many levels.

The full list of winners and runners up can be found below:

2019 Winners
Mental Health Journalism | National Print/Online
Winner: ‘Pregnancy is when mental health can be most at risk’, June Shannon for The Irish Times.
Other nominees: ‘Why it’s not always ‘good to talk’…’, Stella O’Malley for The Irish Independent. ‘You’ve got everything now, you should be fine’: How youth workers are helping LGBTI+ people post-marriage referendum’, Orla Ryan for TheJournal.ie.

Mental Health Journalism | Local Print/Online
Winner: ‘I hid it so well. No one knew’, Carol Byrne for The Clare Champion.
Other nominees: ‘What is happening to our young people?’, Emma Connolly for The Southern Star; ‘Permanent base for Limerick Crisis Response Team’, Nicole Glennon for Limerick Post.

Mental Health Content | Special Interest
Winner: ‘A one-time world champion Irish prodigy’s descent into hell and back’, Paul Fennessy for The42.ie.
Other nominees: ‘PND: ‘This new baby, with a head of blonde hair, was perfect. I was not’, Geraldine Walsh, for The Irish Times; ‘Light At The End Of the Tunnel’, Margaret Hawkins for Irish Farmers Journal, Irish Country Living supplement.

Mental Health Content | Online
Winner: ‘Where There’s a Will’, A Lust for Life Podcast.
Other nominees: ‘I lost two sons to suicide – I want people to know it’s okay to have problems’, Michelle Hennessy for TheJournal.ie Podcast; ‘Are we stressing our children out?’, Dr Malie Coyne for RTÉ Brainstorm.

Headline Student Journalist Award
Winner: Hand in Hand, Jesse Melia of Technological University Dublin.
Other nominees: In Pursuit of Treatment and Identity, Sam Cox of Trinity College Dublin; The Watchers Who Show a Way Out of the Darkness, Nicole Glennon of University Limerick.

Special Recognition
Winner: Blessing Dada for Why I advocate for mental health among minorities article featured on SpunOut.ie.
Other nominees: Jess McCaul for Inpatient Treatment article featured on ALustForLife.com; Meggan O’Reilly for The Happy Plug Podcast.