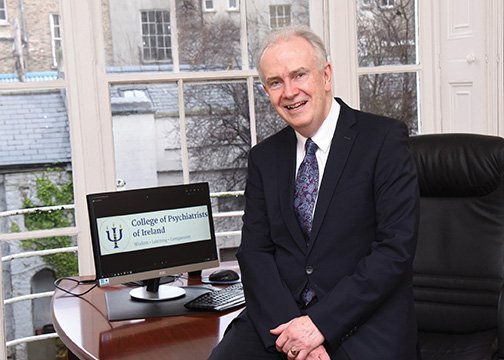 You can read the full Medical Independent article, published on 13/11/19, here. For more information about the conference, click here.

While the lack of training posts in Psychiatry are an issue, Dr Hillery noted that it represents progress from a period when people did not want to undertake psychiatry training in Ireland.

The problem is there aren’t enough posts for them and that’s an issue of money because salaries have to be paid… that seems to be the sticking point at the moment, there’s very little money in the system and there’s no money for new posts and thanks to the success of our training schemes we have more and more people coming through.”

On the upcoming conference with the Royal College of Psychiatrists in Northern Ireland, Dr Hillery said he had two expectations: to “cement relationships further” with colleagues from the North, and to explore “issues around conflict, which are very pertinent at the moment.”

“The programme deals with many issues related to conflict and different psychiatric phenomena that might lead people into conflict and how we should be helping people. So hopefully it will be a stimulating conference for everyone.”

The conference will include a keynote speech by Lord Alderdice speaking about conflict, co-operation and complexity.

“[Lord Alderdice] spoke two years ago at the conference we held too, and he’s obviously got very interesting insights on the matter, seeing as he’s a politician and a psychoanalyst and a psychiatrist.”

The conference will also include keynote presentations by Director of the MSc in Cognitive Behavioural Therapy (Trauma) at Queen’s University, Belfast, Dr Michael Duffy, and Professor of Psychology at University College London, Prof Chris Brewin.