‘Lid must be lifted’ on Financial Abuse of vulnerable adults 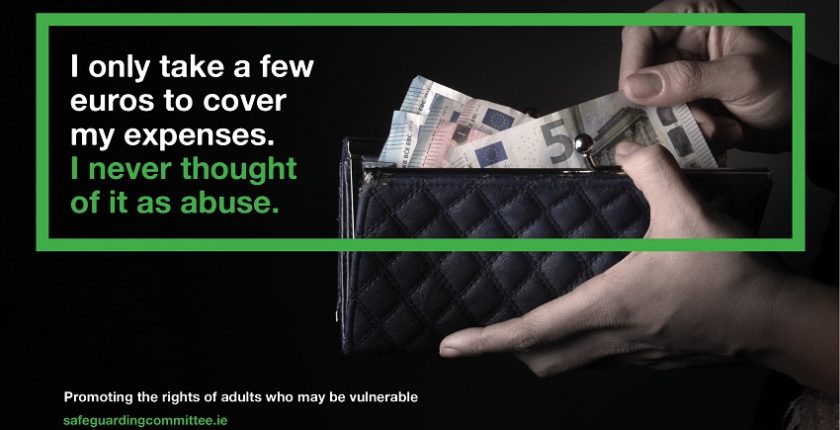 The National Safeguarding Committee (NSC) has kicked off a nationwide public awareness campaign to encourage greater vigilance among the State, Financial and Nursing Home sectors as well as among family members and carers to root out Financial Abuse of vulnerable people. The College of Psychiatrists fully supports the campaign as a member of the NSC.

The College of Psychiatrists of Ireland is a member of the NSC which is a multi-agency and inter-sectoral body established by the HSE (but independent of it) in December 2014 to work collaboratively with a common goal of rooting out financial abuse of vulnerable adults in Ireland – and safeguarding legislation put in place to tackle it.

1,645 cases of alleged adult financial abuse have been reported to the HSE National Safeguarding Office since it started collating data in January 2016 up to June 2017. This includes an increase of approximately 44% in the first half of 2017 compared to a similar period last year.

However, Ms Rickard-Clarke says that these figures represent ‘reported cases’ – and present just the ‘tip of the iceberg’ on financial abuse in Ireland.

Very large amounts of money are involved. For example, the State will pay out €7.2bn in older persons pensions this year. If 10% is subject to financial abuse then the scale of the issue becomes clear.

Financial abuse can arise when due to reduced capacity a vulnerable adult signs over management of their finances to an appointed next of kin, or organisation responsible for their care (an Agent). Once access to the person’s finances are signed to an Agent – there is currently no subsequent tracking of how that money is spent, or who benefits from it. While the vast majority of people are honest, it is estimated that 20% of Agents abuse their role.

Financial abuse can also occur when family members, who are not appointed Agents, assume control of a vulnerable person’s finances – by being added as a joint account holder, or having their pin number and using their bank card.

Ms Rickard-Clarke said financial abuse can be highly calculated, or can be very subtle:

In some cases financial abuse involves aggressive acts of theft, coercion, fraud or intimidation. However, it can also be subtle, and even unintended, as Agents or family members don’t not recognise their wrong doing. For example, it may involve quietly spending a portion of a person’s pension as a perceived ‘reward’ for helping with their care, or occasionally keeping change to cover personal expenses.”

Adult safeguarding legislation is on its way with hearings on adult safeguarding taking place this month at the Joint Oireachtas Heath Committee to scrutinise a draft Adult Safeguarding Bill 2017, put forward by Independent Senator Collette Kelleher.

“The legislation under development will seek to remove ambiguities and make it clear that any use of money, which is not clearly for the direct benefit of the vulnerable person or with their consent, is not acceptable. Financial abuse must be called out as theft and zero tolerance should apply,” Ms Rickard-Clarke said. Measures to tackle financial abuse are included within the Bill which also includes for the establishment of an independent National Adult Safeguarding Authority.

“The NSC is calling on State Agencies to take leadership in introducing safeguards – and for this to extend to the financial, voluntary and community sectors, as well as for individuals. We need a cross-sector and cross-agency system which can ‘red flag’ and bring to account inappropriate uses of people’s finances.”

A dedicated campaign support number has been established by the HSE National Safeguarding Office at (061) 461 358, should people wish to report concerns about financial abuse.

Details of the safeguarding campaign and points of contact to report suspected cases are at www.safeguardingcommittee.ie