‘Journey through the brain’ a free colouring book

Developed by researchers from the Department of Psychiatry in the RCSI and funded by the Health Research Board Journey through the brain – a colouring book was launched today with Minister for Mental Health and Older People Helen McEntee. The colouring book aims to spark young people’s interest in the science of the brain and its connection to human emotion, mental health and well-being.

Journey through the brain does a number of things: 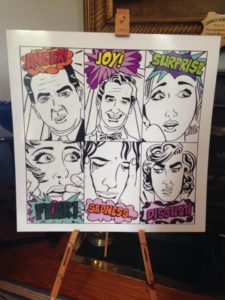 Illustrated by RCSI alumni Dr Eoin Kelleher, the book was funded by the HRB through its Knowledge Exchange and Dissemination Scheme. HRB representative Dr Graham Love describes how the book is a useful tool in progressing communication between scientists and others:

“As scientists we’re guilty at times of having a very tight language, a language that we use to talk to each other, scientist to scientist, it’s the language of journals, it’s the language of citations…and that’s appropriate for science to science communication but traditionally we’re not that great at reaching out and that’s something we need to develop. That’s something [the KEDS programme] is designed to encourage and it requires a different type of thinking and when we see what David, and Mary and Helen, and particularly Eoin and Lorna have done here today, they’ve defined the language more as it’s received by those people; so trying to use the language we as scientists don’t use and that for me is a massive jump from what we see here.”

The book can be downloaded for free on the RCSI website. Additional notes for teachers are also available online giving the opportunity to learn more about the “science” behind the drawings.