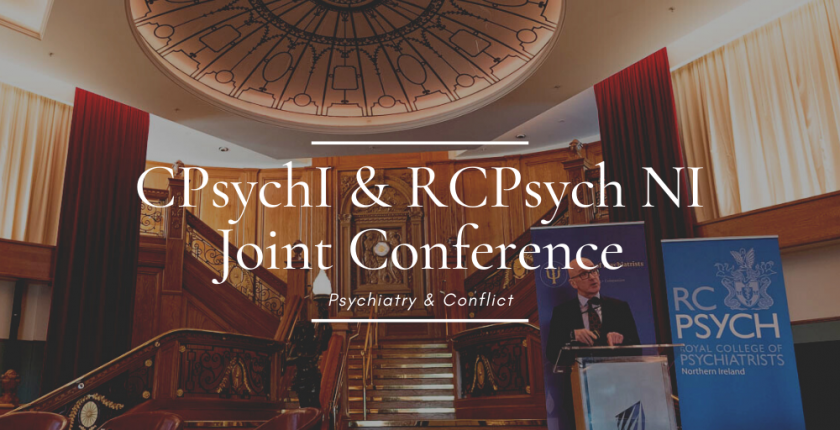 The CPsychI Winter Conference 2019 was held in collaboration with the Royal College of Psychiatrists in Northern Ireland in Belfast.

Themed ‘Psychiatry & Conflict’, the two-day programme featured a number of internationally renowned speakers (domestic and international) and several parallel sessions. This year’s Winter Conference was an opportunity to further cement relationships with our colleagues from the North, and to explore issues around conflict in its many forms.

The conference was opened on Thursday morning by College President, Dr John Hillery and Dr Gerry Lynch, Chair and Vice President of the Royal College of Psychiatrists in Northern Ireland.

The parallel sessions at this year’s Winter Conference provided many interesting topics including the Transitioning from CAMHS to AMHS, Training Across Ireland, Personality Disorders, Hands On, Mixed Methods Research with Public Patient Involvement and PCS Workshop: Brake at the border?

Thursday evening included an awards ceremony and Northern Ireland members ceremony, followed by a drinks reception and the conference dinner.

Friday morning opened with a talk by Dr Mayura Deshpande titled Deradicalisation and the Psychiatrist: What is our lane?which illustrated the ethical dilemmas for psychiatrists inherent in the Prevent Agenda. This was followed by a presentation by Dr Cathy Stannard titled Crisis? What Crisis? Global Opioid Conversations, which covered the North American opioid epidemic and concerns of a similar epidemic unfolding in Europe, prompting initiatives to mitigate such a disaster. The talk covered data on prescription misuse and contrasts between American and European culture and healthcare that may be protective against our own opioid epidemic.

The conference closed with a presentation by Dr Daisy Fancourt, titled Harnessing Creativity in Health Frontiers in Social Prescribing Research and Practice.

View photos from the Awards Ceremony