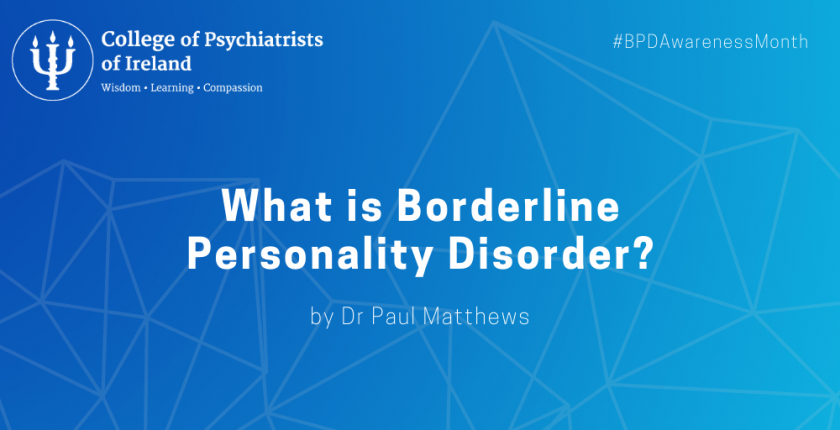 As part of our information series marking Borderline Personality Disorder Awareness Month 2022, Dr Paul Matthews, Consultant General Adult Psychiatrist and Chair of the CPsychI Personality Disorders Special Interest Group, provides an overview of what we mean when we discuss this often-misunderstood diagnosis.

As a label, borderline personality disorder still carries a lot of stigma and negative connotations, amongst the general public but also among health professionals. Even the name itself is confusing, dating back to the 1930s when it was placed at the borderline between the psychoanalytic concepts of ‘psychosis’ and ‘neurosis’ – these labels don’t really map onto modern psychiatric practice but the name stuck. More recently the name ‘emotionally unstable personality disorder’ has been used but many people reject both as stigmatising and use terms like ‘complex emotional needs.’

What is borderline personality disorder?

Unlike mental illnesses such as clinical depression or psychosis, personality disorders are considered to be extreme manifestations of people’s underlying personality, the relatively stable ways of thinking, feeling, and behaving that become manifest in childhood or young adulthood. How we distinguish between something being at the extreme of the range of personalities and calling it a ‘disorder’ is when people start to develop distress and difficulties in their day-to-day living and functioning, but ultimately where we draw the line is somewhat arbitrary.

People with borderline personality can experience many of the following problems:

Disturbed sense of self
o  Unsure of who they are or what they want
o  Feeling disconnected from the world or body
o  Periods of paranoia or other psychotic experiences (e.g. hearing voices)

How common is borderline personality?

What treatments are available?

DBT is the most commonly available treatment for borderline personality available in Ireland but unfortunately we know that many areas are unable to offer any evidence-based therapies. Ireland lacks specialist psychiatrists trained in delivering psychotherapy or the specialist therapy services for borderline personality seen in other countries. The College of Psychiatrists of Ireland has recently published a position paper that highlights the level of unmet need in Ireland that remains for people with borderline personality: https://www.irishpsychiatry.ie/blog/new-position-paper-development-of-services-for-treatment-of-personality-disorder-in-adult-mental-health-services/

See below for further resources, information and discussion on Borderline Personality Disorder:

PersonalityDisorder.org.uk – Developed by the UK Department of Health.