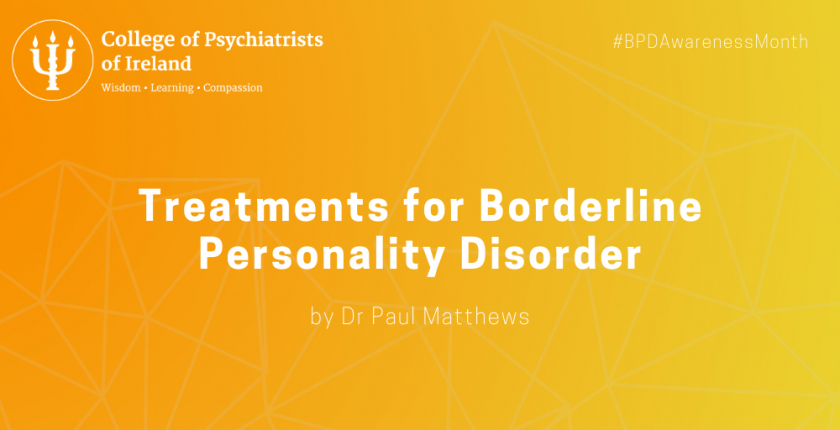 This article is part of our information series marking Borderline Personality Disorder Awareness Month this May. You can read more in the series below this post and watch out for a further patient perspective coming soon.

What psychological therapies are effective for borderline personality?

For many years patients with personality disorder were considered to be untreatable and psychiatrists would often avoid making the diagnosis at all. Where specialist services were available, psychological therapy was recognised as the most appropriate treatment for people who would meet the criteria for a diagnosis of borderline personality disorder and individual psychodynamic psychotherapy or group therapy were the most common approaches, although without much of an evidence base to justify this.

However, in the 1990s Marsha Linehan developed dialectical behaviour therapy (DBT) and established good evidence from clinical trials that it is an effective treatment for people with borderline personality. More recently, mentalisation-based treatment (MBT) was developed and this has also been shown to be very effective.

DBT takes inspiration from cognitive behavioural therapy (CBT), including methods for regulating emotions, and combines these with distress tolerance techniques and ideas around mindfulness and radical acceptance. MBT has its origins in psychodynamic therapy but instead focuses on the here and now and promoting mentalisation, the ability to understand your own and other people’s mental states. Both DBT and MBT are long-term therapies lasting 12-18m and involving individual and group-based sessions.

DBT and MBT have the best evidence for effectiveness but many other therapies have shown some evidence of benefit for borderline personality, including schema-focused therapy, various psychodynamic therapies (such as transference-focused therapy, and democratic therapeutic communities), and cognitive analytic therapy (CAT). Skills-based groups are also used for people with less severe difficulties (e.g. DBT-skills; STEPPS [systems training for emotional predictability and problem solving]).

It does seem that the structure of the overall approach to treating people with borderline personality is important and attempts have been made to develop less specialist approaches that still include some of the same structural features as DBT and MBT. This is seen in structured clinical management (SCM) which attempts to create a framework for non-specialist mental health staff to work with people with borderline personality, although it still includes both individual and group sessions and is longer-term (at least six months). SCM highlights that much of the benefit seen in specialist treatments such as DBT and MBT may be related to non-specific factors such as whole team case management, having a consistent keyworker, and skills training.

In the past there were not many treatments available for borderline personality and medication was commonly used. The continuing widespread use of medication probably reflects ongoing difficulties in accessing psychological therapy for people with borderline personality. Although some studies have suggested there might be benefits in the short-term, most specialists do not believe that these benefits continue in the longer-term and recommend that medication is avoided except for short-term use during severe emotional crises. If people with borderline personality develop other comorbid mental disorders such as depression then these should be treated in the usual way, which might include using medication.

Should people with borderline personality be in hospital?

Admission to a psychiatric hospital is generally discouraged for people with borderline personality disorder outside of specialist inpatient treatment programmes. This is because borderline personality is a long-term condition and admission to hospital is not likely to change these longstanding difficulties (which need longer-term therapy), reinforces expectations of a quick-fix approach, and can serve to reinforce and escalate self-destructive patterns of behaviour. Occasionally, where there is a high acute risk of suicide, a brief crisis admission is sometimes considered for a few days.

What treatments for borderline personality are there in Ireland?

The provision of evidence-based psychotherapy for borderline personality remains very patchy in Ireland. Although the HSE provides some training in DBT for mental health teams many are unable to offer it. A 2019 survey of consultant psychiatrists working in public and private practice in Ireland found that just over half were able to offer an evidence-based therapy in their service and nearly half identified a lack of resources in delivering treatment. Ireland lacks specialist psychiatrists trained in delivering psychotherapy or the specialist therapy services for borderline personality seen in other countries. The College of Psychiatrists of Ireland has also recently published a position paper that highlights the level of unmet need in Ireland that remains for people with borderline personality.

What is Borderline Personality Disorder – by Dr Paul Matthews

PersonalityDisorder.org.uk – Developed by the UK Department of Health.